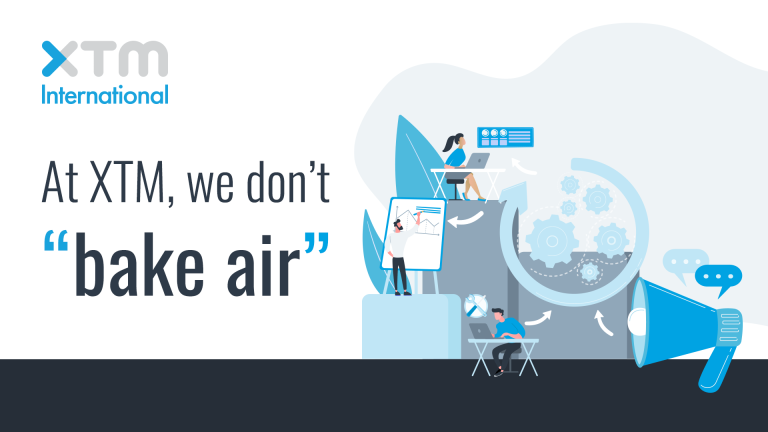 Sport is one of the many areas of interest we have at XTM, and as all sport lovers did, we avidly followed the recent Women’s European Championship Final between England and Germany, in which England won 2-1 in extra time to become champions. Listening to the post-match interview with England manager Sarina Wiegman, an expression she used piqued our interest: “We did not bake air”, an idiom used to describe the recipe for her team’s success. We know a thing or two about languages and translation, but had never heard this expression before, so we looked into it.

‘Baked air’ or gebakken lucht in Dutch is an expression that can be used to describe something that is given a lot of hype but which turns out to be nothing. In other words: empty talk. This got us thinking about how important it is to not “bake air” in the localization industry, especially in our field of localization technology and Translation Management System.

At XTM, a simple approach influences our actions: if it matters to you, it matters to us. For this reason, we decided to create the XTM Wish List, a feature-request portal where our users can submit their ideas for improvements or general feedback on XTM Cloud’s features, which may get added to our roadmap. New features based on users’ requests and feedback appear in every single XTM Cloud release, thus tailoring our Translation Management System to our customers’ needs. But that’s not all.

We also created XTM Labs, which provides users with early access to exclusive features requested in the XTM Wish List. Once a feature requested by our users is being developed for a future release of XTM Cloud, the user or users who requested it will receive a notification that they are part of XTM Labs for that particular feature. After the new feature has been developed, these users are introduced to it and have exclusive access to it. However, the journey still doesn’t end here.

XTM Labs is not just a way for users to have exclusive access to these features but it also gives them the opportunity to provide feedback on them to make sure that their expectations are met. This allows XTM developers to make some final adjustments before the feature is included in the upcoming XTM Cloud release and made available to all our customers.

The XTM Wish List and XTM Labs are dynamic means to connect with our customers on a regular basis, as we strive to provide them with a TMS that is tailored to their needs whilst still being the leading TMS solution on the market. Our customers’ opinion is paramount to us, which is why we don’t just promise that we’ll listen to them – their feedback is a major part of our new releases! This is why, at XTM, we don’t “bake air” – we deliver what’s important to you.

Do you have any great ideas or feedback on XTM Cloud that you’d like to share with us? We’d love to hear them! Request access to XTM On Demand and go to ‘XTM Wish List‘ to submit them or to comment and vote on our existing features.