Did you know… Exploring what XTM Cloud 13.0 can do for you 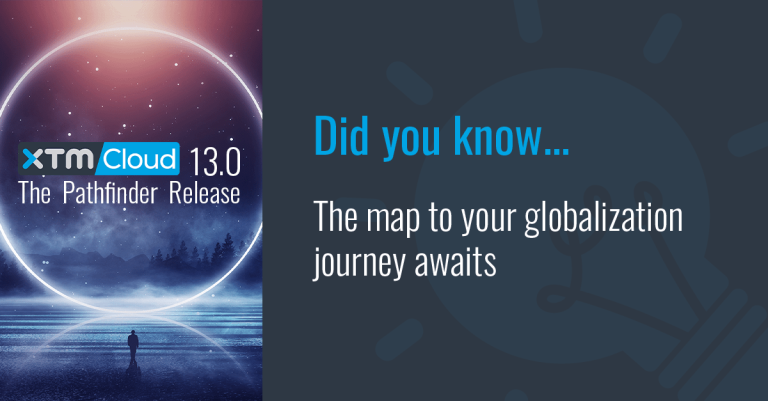 Did you know… Exploring what XTM Cloud 13.0 can do for you

On Monday 21st March, we launched XTM Cloud 13.0: The Pathfinder Release. We introduced a number of new exciting features and enhancements, which you may not know about. Here are some secret insights into the release that you may have missed.

Did you know that TM leveraging has been improved by up to 25%?

We have a very cool proprietary way to do TM leveraging, which we call Weighted Token Levenshtein. It means that project managers or translation requesters can now have full peace of mind that they are making the best possible use of their translation memories. In this latest release, our proprietary algorithm has been enhanced to deliver up to 25% improved accuracy, now enabling users to leverage more TM matches in segments which differ only by the order of words or only by proper nouns.

For instance, a project which includes the following segment: “Enjoy your stay in Chicago” and there is an almost identical segment in the TM: “Enjoy your stay in Las Vegas”. The previous approach would give a fuzzy calculation score of 75%, this would have meant that the match would appear to have a large textual difference, where in reality, the segment only requires minimal rework. With our improved algorithm, released in 13.0 the same sentence can give a match of 97%, which translates to significant savings.

Here is how this can impact the project costs. For simplicity, let’s say that a no match word is charged at $0.10. Therefore, a new translation for “Enjoy your stay in Chicago” would cost $0.50. With our algorithm delivering a 97% match, linguists would only have to add in “Las Vegas”, which would cost $0.10 only. In this case, the translation would be 5 times cheaper! Here, the savings come from the fact that our fuzzy matching calculation score algorithm was able to retrieve the TM match, as opposed to standard algorithms which would assign too low a score to this example or possibly fail to retrieve it at all.

Using Weighted Token Levenshtein, the target language can be automatically populated with much higher fuzzy matches for segments which only differ by the order of words or proper nouns, ensuring that linguists have significantly less to do.

Filling in the blanks, did you know that Machine Translation and your TM can work even better together?

When you have partial Translation Memory matches, wouldn’t it be great to be able to send these to a Machine Translation engine to fill in the blanks? The ground-breaking  AI-enhanced TM feature powered by SYSTRAN Neural Fuzzy Augmented (NFA) does just that. Fuzzy matches coming from the TM can now be directly sent to SYSTRAN’s MT engine, enabling TM and Machine Translation to work together to deliver the best match possible. This is particularly useful when the source text could be translated in a number of different ways.

For instance, “glasses” could be referring to reading glasses, or wine glasses. Although that information is clear in the TM based on previous segments where “glasses” appeared in the source language and in the target segment with the right translation, machine translation could get it wrong. By allowing them to join forces, SYSTRAN automatically delivers the right translation, making localization easier and faster for linguists, as well as strengthening the alliance between your existing Translation Memory and Machine Translation, creating an opportunity to leverage existing resources in an innovative way. The MT engine now automatically respects your custom terminology, since it receives it directly from your human TM, without the need for lengthy and costly MT training.

Did you know that XTM Labs features come from the XTM Wish List?

With 13.0, we also bring you a brand new concept: XTM Labs. With XTM Wish List, we gave you an opportunity to request or vote for new features. XTM Labs takes this concept one step further. From now on, when new features and upgrades that you suggested are included in our next release, you’ll get exclusive access to those specific features. It gets better: you’ll also be able to submit feedback, before it becomes available to everyone else. With XTM Labs and XTM Wish List, you can shape the development of XTM Cloud.

Did you know that new connector features are released more often?

In parallel to the release of 13.0, our connectors are entering a continuous deployment cycle, providing ongoing releases of new features. This means that you will see updates being made to connectors in between our main releases, enabling use of new connector functionality faster. This time around (version 13.0) We have already introduced improvements to Optimizely (previously Episerver), Kontent by Kentico, Contentful and HubSpot.

We’re delighted with the response to the launch of XTM Cloud 13.0. When users tell us we’re succeeding, it spurs us to work even harder and do even better on their behalf. To find out how the Pathfinder release is living up to its name and helping users chart their own localization journey, Request a Demo or Watch our Launch Event Replay. In the meantime we’ll keep working on the upgrades and new features that matter to you. Because if it matters to you, it matters to us