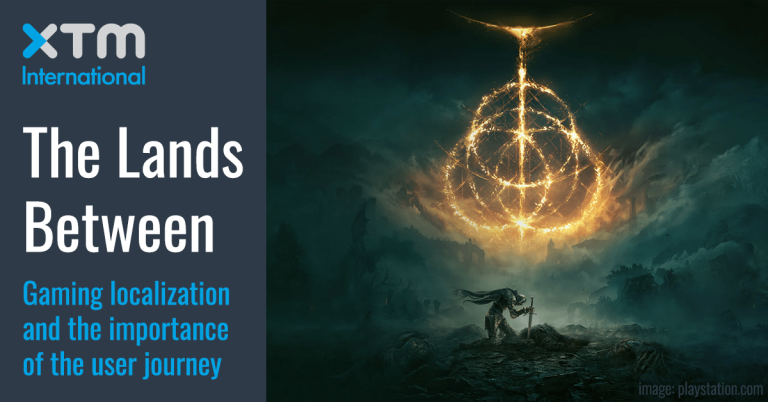 When Bandai Namco Entertainment published Pac-Man 99 in April 2021, they introduced a vibrant new chapter to a 40 year old story. A maze game with Battle Royale features, it delighted long-standing supporters of the Pac-Man franchise and won a new generation of fans. Expert gaming localization made it globally accessible and by mid-summer Pac-Man 99 had been downloaded over 4 million times.

Today Bandai Namco take us on another journey. Directed by Hidetaka Miyazaki and with design input from George R.R. Martin, expectation for Elden Ring are high. Early responses suggest that those expectations will be met and exceeded.

Gamers will debate passionately about the fine details of language and tone, and rightly so. For the time that they inhabit this world, it belongs to them and they are entitled to speak up about anything that detracts from the user experience.

Bandai Namco and Miyazaki’s previous work on the Souls series showed gaming localization at its best, with English language versions of the games including terms and phrases that the translators created themselves, with Miyazaki’s guidance. Some of these phrases were so on-point that they were incorporated into the original Japanese versions.

Like the gamers they serve, gaming localization professionals deserve a fully-formed environment to work in. Elden Ring takes place in the realm of the Lands Between. Players must travel across the realm, seeking scattered parts of the precious ring to make it complete. While this has obvious appeal for gamers, a similar real-life quest might be frustrating for gaming localization specialists. Searching the world for scattered translation assets is more of a chore than an adventure, and we see greater value in centralizing those assets and having a fully accessible translation memory in place from the beginning of a project.

In other ways, though, the journey of the gamer and of the gaming localization project manager are more similar. Players seeking the Elden Ring start by following a linear path but eventually progress to freely explore the Lands Between, including its castles, fortresses and catacombs. As their confidence grows, they can shape their own journey. At XTM we take a similar view of the user path. We support user customization of our translation management system, putting them in control of their localization journey. We empower users to make their own choices and create their own success stories, just like Bandai Namco and Hidetaka Miyazaki. The realm they’ve created with Elden Ring has six main areas that are interconnected through a central hub. Players access them as the game unfolds, and they have the option of a fast-travel system. XTM Cloud puts gaming localization specialists at the heart of an interconnected technology network, giving them seamless access to best in class tech partners. And XTM Cloud offers its own in-built fast travel system in the form of AI applications that automate translation and project management processes at the speed of thought.

The word translation literally means “to carry across”. When game publishers trust a translation management system provider with the localization of their work, they trust us to carry across something that’s precious to them. They trust us to preserve the world they’ve skilfully and lovingly created, and make it a place where gamers of all nationalities feel welcome and engaged. They know from experience that we won’t let them down. Gamers have that same sense of trust and confidence in Bandai Namco, and today’s launch of Elden Ring marks the latest chapter in a well-deserved success story. Our message to gamers is, we hope you enjoy this exciting new release. Our message to gaming localization professionals is more practical.

Don’t get lost in the Lands Between. Make sure your message reaches every gamer in every territory with premium gaming localization from a premium translation management system.