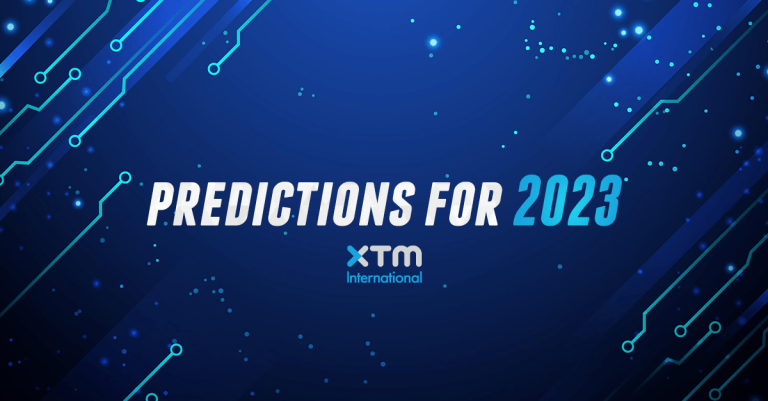 The year 2022 was a turning point for the whole business world. As many countries started to finally come out of the pandemic, we were delighted to get back to in-person events, see familiar faces once again and witness things returning to normal, but in reality the “return to a new normal” was short lived. The recovery in spending that we saw during 2021 started to wane, and companies have now entered a new period of economic uncertainty. On the other hand, the organizational processes and structures they were forced to quickly adopt during the pandemic such as operating at speed, removing analysis paralysis, and focusing on being more agile, flexible, and adaptable, have now been more standardized and even perceived as an improvement on the previous situation.

The emergence of new AI-based technologies like large language models which speed up processes through automation and maximize cost efficiency, added to the accelerated digital transformation of companies, have led to the establishment of new team structures such as Language Operations, or LangOps, structures that were previously considered potential longer-term shifts. Their implementation could be a turning point for companies as they look to make their global operations better and more cost efficient.

With all of these changes happening at breakneck speed and almost in a simultaneous fashion, what can we expect to see next? To start, here are three predictions that we think will happen in 2023.

“LL… what?” you may ask. If you have never come across this term before, Large Language Models (LLM) are AI tools which can, among other things, translate and predict text in a sentence to create output that is astonishingly similar to how a human would do it. They first arrived on the scene at the start of the decade, and since then they’ve had a phenomenal effect on the world of language technology, not just in terms of a quality boost thanks to the improved, more human-like output they produce compared to other machine-translation tools; but also in terms of speed, since they can produce this level of output with none or very little training. We’ve seen with ChatGPT in late 2022 what AI is capable of in terms of creating output with LLMs. This has shown us what LLMs can do and the direction in which AI is heading — a fabulous way to automate the detailed sharing of knowledge beyond our expectations.

Whereas NMT works by predicting word sequences based on its “training” (previously inputted translations), LLMs create output by predicting the probability of word sequences based on text datasets. One of the most glaring differences between them is that the “training time” for LLMs is considerably shorter than it is for NMT — whereas some NMT engines can take weeks or even months to train in order to produce optimum output, training for LLMs we’re talking about a matter of minutes or even less, since they are extremely good at zero-shot learning.

We have seen before how the successful implementation and deployment of a specific device, feature or phenomena by pioneering companies can hugely accelerate a predicted and expected transition in much less time than what was initially expected, e.g. the widespread adoption of cell phones in the mid-2000s or the boom of low-cost air travel some two decades ago following the lead of one particularly innovative airline. In a similar way, the familiarity with AI in the localization industry has passed an inflection point, and we believe LLMs will be a key phase which will see significant usage and dependency by the latent market, and potentially the hype will be justified. The net benefit of LLM for the business industry is users will be able to leverage machine translation of human-like quality and not have to wait for long periods of time to train it to an appropriate level that requires minimum or no human input. If LLMs are going to produce human-like translations, this will have a knock-on effect on localization buyer habits and the supply chain.

Is this the beginning of the end for NMT?

From a cost-efficiency perspective, training time for NMT is much higher than for LLMs, and there are aspects of NMT which still leave a lot to be desired, such as not being able to apply custom terminology, translating really long sentences or finding the right translation to fit context. Compared to the zero-shot or super fast learning of LLMs, we believe that such a time difference will start to make a difference in the technology that providers or companies start to use and deploy respectively. In the same way that we saw with the shift from statistical machine translation (SMT) to neural machine translation (NMT) back in 2016, in which NMT superseded SMT as the most advanced form of machine translation thanks to more fluent output and reduced post-editing time, LLM is set to rival NMT and eventually, we believe, surpass it as the most efficient and qualitative form of machine translation.

Digital transformation and enhanced technological maturity as a path to growth

Companies had to adapt their processes and business models during the pandemic in order to stay competitive as a result of (forced) changes in consumer behavior. E-commerce sales in the United States grew by 50% from 2019 to 2020 and a further 14% in 2021. Companies accelerated their digital transformation, and the concepts of speed, agility, and flexibility became vital in how they operated. As a result, companies realized that these new organizational processes constituted an improvement over the previous ones.

Digital transformation had been a goal for many industries in the past decade(plus), the arrival of the pandemic accelerated that process. $1.5 trillion was spent globally on digital transformation in 2021, and this figure is expected to grow to $6.8 trillion by 2023. This transformation enables employees to develop their digital skills, in many cases where they had never been required to before. This democratization of technology and resulting increase in technological maturity allowed companies to obtain better results and superior performance as a whole. In other words, the needs that arose as a consequence of the pandemic ended up establishing themselves and proving to be a considerable improvement over the ones in place previously.

Research conducted by Harvard Business Review found that “companies that made good investments in technology and made tools accessible to a broad community of data- and tech-skilled employees achieved higher tech intensity—and superior performance”, whereas “companies that failed to develop tech- and data-related capabilities in their employees and offered only limited access to technology were left behind.”

We expect companies to continue or follow this positive trend that comes with the digital transformation that accelerated so quickly during the pandemic. On the other hand, it makes no sense to build an online presence in global markets without localization, so adding localization technology to their content technology stack will be a necessary step companies will need to consider and address if they want to achieve the success that comes with going all in on digital.

LangOps – From question mark to need

Forbes published an article in April 2021 proposing LangOps as “the next frontier”. In it, João Graça described LangOps as “the way to efficiently operationalize localization”. In other words, the trend in the tech industry has been to have operations for all departments, and what they have in common is that they, “must leverage technology to drive collaboration and efficiency across departments.” In other words, LangOps can help companies maximize their resources, which is also known as “doing more with the same or even less”.

LangOps is the centralization of resources and cross-functional collaboration of departments through advanced technology like AI that provides greater efficiency, control, and visibility of the localization process. By adopting a LangOps strategy, companies can communicate more efficiently with all their global customers and stakeholders without any bottlenecks thanks to having a team solely dedicated to all localization and/or translation activities. This allows them to enter new markets more quickly and efficiently.

Arthur Wetzel recently wrote in Multilingual magazine how LangOps can create opportunities for business growth, a strategy we believe will set apart successful companies from unsuccessful ones in this economic climate: “With such a broad range of possible applications, it’s a no-brainer that investing in a LangOps strategy may result in improved organizational experiences, better scalability for diverse departments, and enhanced consumer experiences. Having the correct LangOps leadership in place and understanding which areas of a business require process improvement are sure-fire approaches to building a successful plan. With LangOps, language will no longer be regarded as an impediment to corporate growth.”

We believe that companies who are finding ways of optimizing their localization spend will realize the value of LangOps, and that this approach will be adopted more widely across the industry thanks to the increasing deployment and availability of advanced technology such as AI. It will therefore establish itself as the most efficient way to localize, bringing all your teams together, and having them row in the same direction with technology as its main driver.

These advances, such as LLMs, are being released at breakneck speed by technological providers (Forbes predicts that we should be expecting OpenAI to release GPT-4 in the first quarter of 2023), and their importance and relevance has never been greater than it is now considering the current needs and available resources of companies, as they expand their online presence with a limitation on resources. As technological approaches transition from ‘want’ to ‘need’, it will be interesting to see which one companies take to navigate the seas of economic uncertainty (albeit perhaps a short-lived uncertainty) that lie ahead, and whether they choose to truly embrace new technologies and optimized strategies as a way to sail through their newfound challenges.

We believe these three topics will play a big role in localization technology in the coming year and beyond. Stay tuned for more content on AI, LLMs and LangOps coming soon! In the meantime, you can check out our other articles on the latest localization trends here.

Would you like to learn more about advanced AI-based localization technology?